Notice: Trying to access array offset on value of type null in /var/www/web/wp-content/themes/html5blank-stable/single.php on line 4

Review of ‘Let us Dream’ by Jorge Mario Bergoglio

A member of my book group is a very keen Roman Catholic. Whenever it was his chance to choose a book he 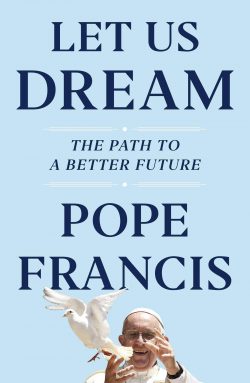 would nominate the latest papal encyclical. Not everyone’s idea of bedtime reading – though they were often surprisingly good!

‘Let us Dream’ by Pope Francis is a very different kind of document, and highly readable. Bergoglio gave a clue to the style of his papacy in his choice of name, and the simplicity and directness of his writing is very much in the tradition of his namesake. I say ‘his writing’, but in truth this timely and apposite book is a transcription of recordings made by the Pope in response to questions put to him by the ‘ghost’ author, Austen Ivereigh. At least, that’s how it started. But in the months June-August 2020 the two of them entered into a deep collaboration, the Pope sending sometimes daily transmissions of thoughts, ideas, quotations, and biblical references.

The Pope’s thinking arises out of his reflections on the Covid crisis, but goes both further and deeper. With candour and a degree of disclosure that is unusual for a Pope, he reveals how three crises in his own life changed him dramatically for the better, to someone who is more in touch with his own inner processes, more related to the reality of being human in the modern world. Francis argues that we cannot return to the pre-Covid state. Citing his own experience, he says that if we have the courage to change we can emerge better than before. He offers a scathing critique of the systems and ideologies that have conspired to bring us to where we are. He reminds us of our responsibility for the poor and marginalised. As we have discovered so dramatically in recent months, if one part suffers we all suffer. He speaks as a priest and theologian, but draws widely on the thinking of scientists, economists, activists and others.

In the Greek myth, Ariadne hands Theseus a ball of thread to track his way out of the labyrinth. The ball of thread we have been given is our creativity to move beyond the inexorable logic of the labyrinth, to decentre and transcend. The gift is the Spirit calling us out of ourselves, the ‘twitch upon the thread’, leading us to a shared future full of possibility.

I commend this challenging and refreshing book to you (£10.99 Simon and Schuster).

Back to news and information